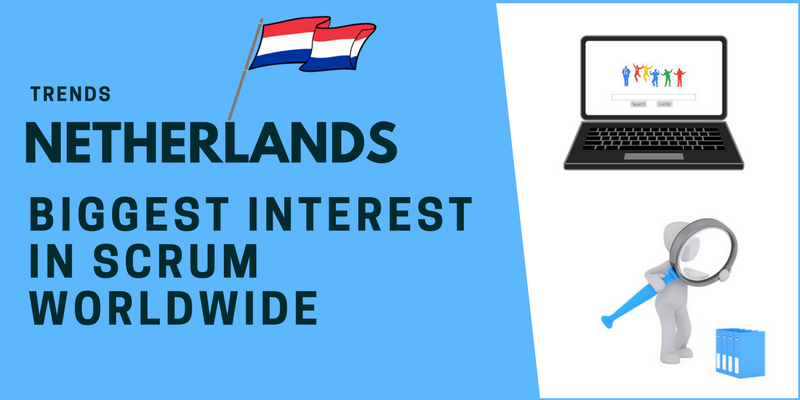 How interested are people in Scrum? Is it´s popularity growing or declining? What about the interest in Agile or DevOps?

A few days ago I stumbled upon the website from google, called https://trends.google.com, which tells you what people search for on the Internet using the Google search engine.

I was actually curious to see what people, who are interested in Agile and Scrum, are looking for.

So I clicked a bit around and found 3 interesting results, which I would like to share with you:

“Scrum” most popular in the Netherlands

It turns out that people from the Netherlands searched for “Scrum” the most compared to any other country in the world. I looked at a time range of the previous 12 months (November 2016 to October 2017). 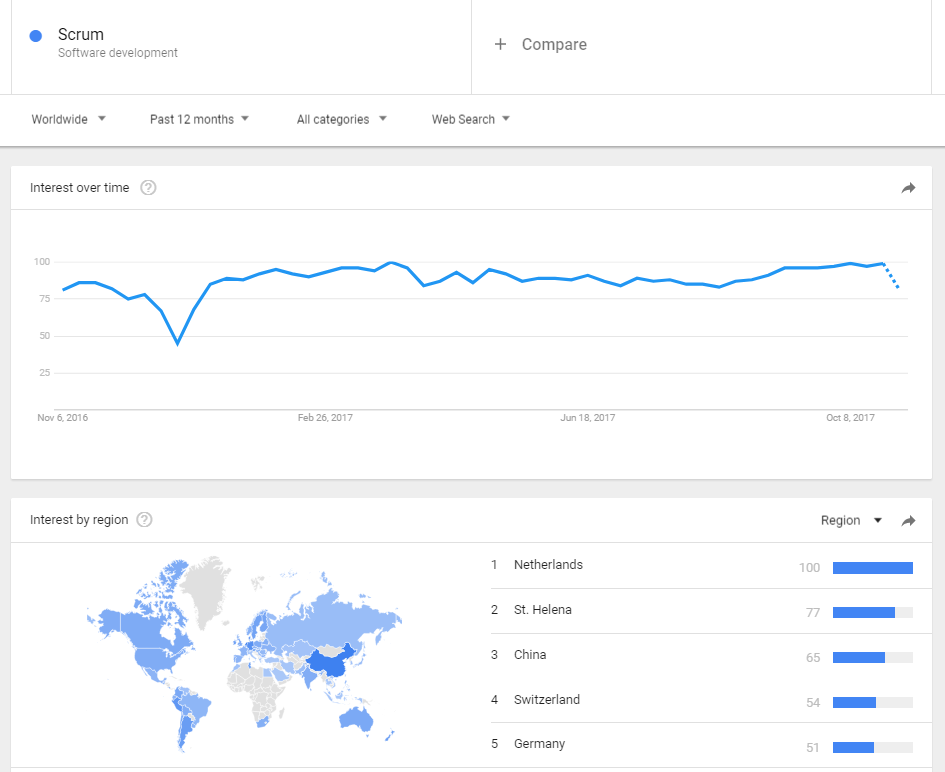 A higher value means a higher proportion of all queries, not a higher absolute query count. This means, the numbers are relative to the size of a country and therefore you can compare a very small with a very big country easily.

The result is very interesting for me, because I (still) live in the Netherlands and I know that Scrum and Agile is big here.

But I didn´t know that people in the Netherlands are leading the ranking and have the highest interest in Scrum worldwide.

St. Helena and China are (to my surprise) on the second and third place in the ranking. I will revisit both of them in a minute.

If you compare the Dutchies to Switzerland and Germany, which are on the 4. and 5. place in the ranking, then the interest there is just about 50% compared to the Netherlands.

I had to look it up in Google maps as well, it´s a small Island somewhere in the middle of the Atlantic Ocean. It probably sounds familiar to you as well, because this is the Island, where Napoleon was banned after he lost the Battle of Waterloo in 1815.

Anyway, there live around 4500 people on the Island and they are obviously crazy about Agile software development.

If you go there for holiday you probably find agile people all over the place. 🙂 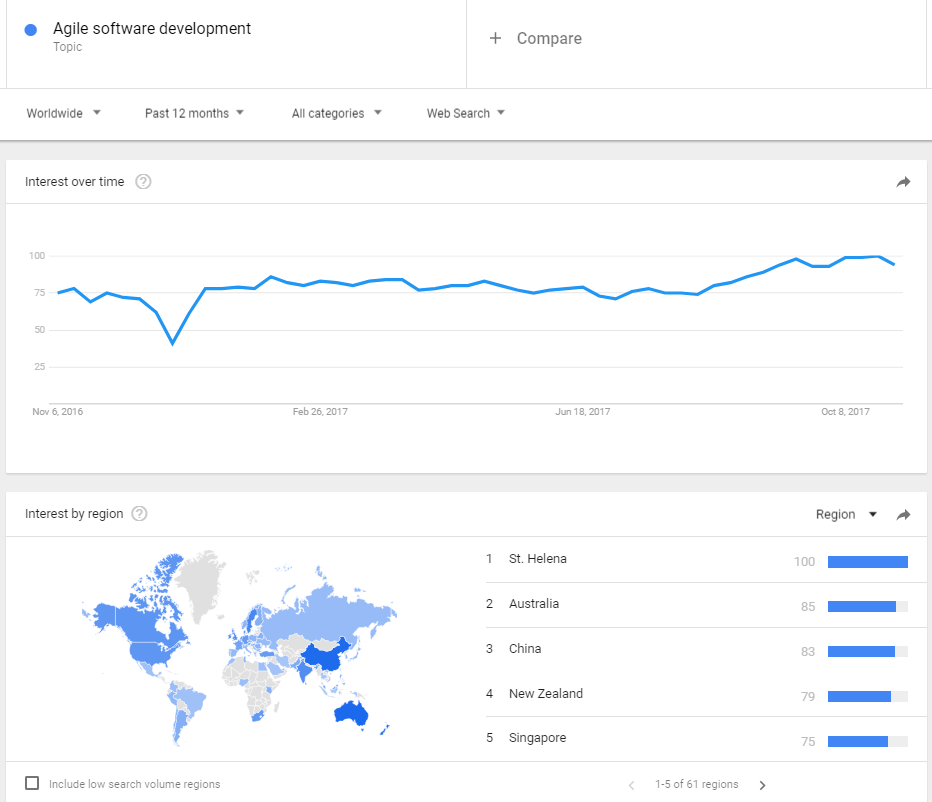 As you can see in the graph, the popularity of “Agile software development” was quite stable throughout the year, but started to increase since August 2017 (until today November 2017).

So, either Agile software development is really getting more traction since the last 3 months, or google made changes in one of their algorithms.

This is just interesting for me, because the amount of page views on my blog increased as well. It actually follows pretty much the same pattern as above – quite stable throughout the year, and then a linear increase within the last 3 month.

So I thought, maybe the graph in google trends is actually caused by my blog?

“DevOps” is very popular in China 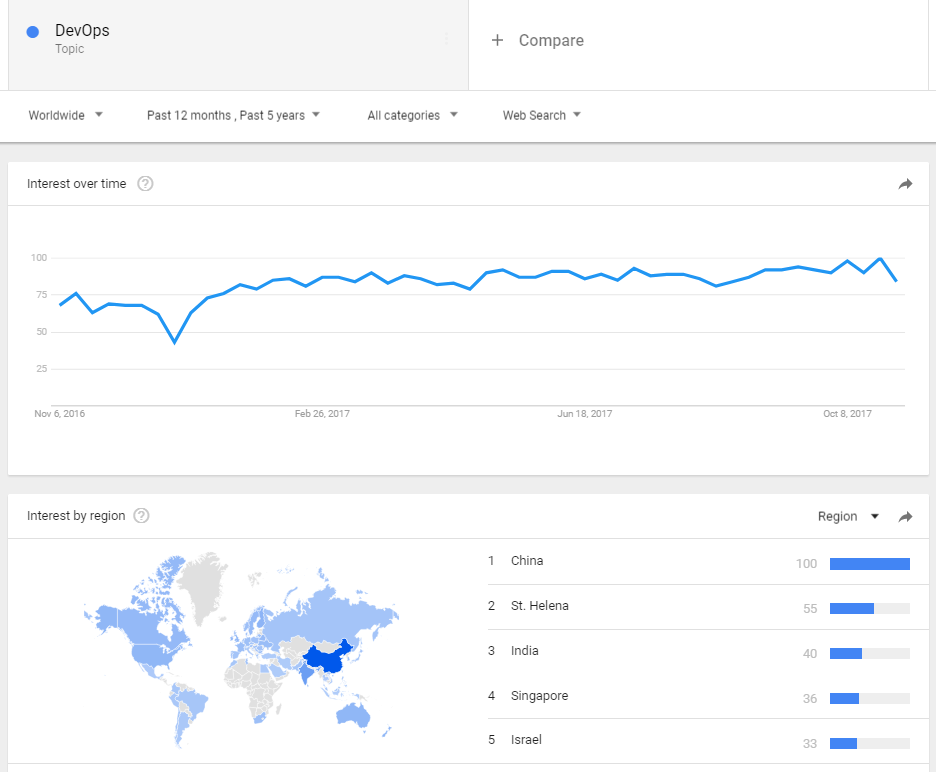 If you look at the numbers, then the Chinese interest in DevOps is way ahead. St. Helena again, on second place, has only 55%. And then we have India on the third place with only 40%.

But anyway, I think Google trends is a very interesting and powerful tool. And it is really fast.

It gives you insights in what people are searching for on the Internet using the Google search engine.

And the cool thing is, that Google gives you access to this information for free.

So have a look at it and play around. There are quite some nice features to discover.

Btw: if you were wondering why the graph has its minimum always at the same time in all of the three graphs, then I can tell you that people don´t want to know about Scrum, Agile development or DevOps at the end of the year. 🙂

It seems, like everyone is at home celebrating Christmas and New Year, and spending no time searching the Internet for these topics.

But that´s happening not only for these three topics, but the amount of queries in general goes down during these days.

If you want to look into this further by yourself, here are actually the links to the queries I used in google trends:

Ok, that´s it for today. Stay tuned and HabbediEhre!