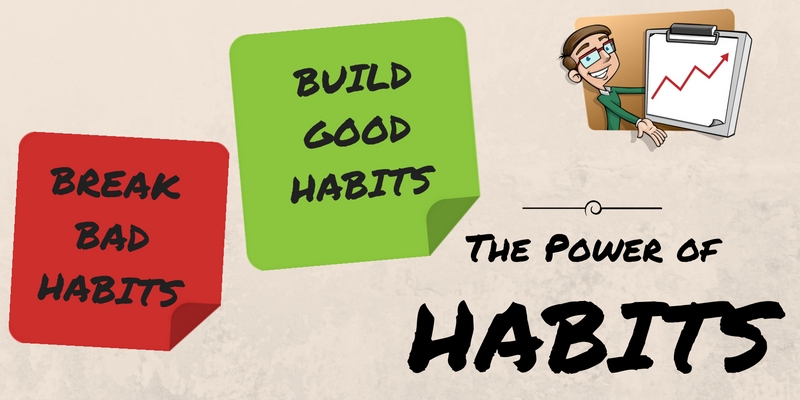 A habit is something that you do often and regularly, sometimes without even knowing that you are doing it. The great thing about habits is that you can train yourself to make yourself execute certain tasks regularly without even thinking.

Everyone of us has millions of habits, good ones and bad ones. And they are triggered by certain events in life.

For instance, did you brush your teeth today in the morning? You might not even remember that you did it, because it is a habit. You don’t even have to think about it, it is just part of your morning routine and triggered automatically when you wake up.

You almost need no will power to execute a habit

The great thing about a habit is that you almost need no will power to execute it. That’s why they are so powerful.

If you can make a task to a habit, which you know will help you on a long term, then you almost need no will power to consistently execute it.

For example, if you want to learn playing the piano and you make practicing it to a habit, then you don’t need any will power to get yourself in front of the piano to practice.

Or if you want to eat healthier and you make it to a habit, then you don’t have to spend your limited will power every day in overcoming the temptation to not eat chocolate. It will go automatically without even thinking.

But how do you create habits then?

Creating habits is not so easy, but if you do it regularly, then it is getting easier over time.

. I highly recommend this book to everyone, who wants to learn more about habits.

Tynan explains in his book that there are two phases to build habits, the loading phase and the maintenance phase.

In the loading phase you want to teach yourself a new habit. Therefore you have to execute the task every day in the same routine.

For instance, after you come home from work you play the piano for 5 minutes every day.

This requires a lot of discipline and you have to constantly remind yourself to do that. For example, you can set an alarm on your phone or put a sticky note on the piano so you won’t miss it when you come home from work.

In the loading phase it is very important to execute the task always, even though your motivation might be down.

If you will really miss it once, then plan your next day in a way that it ensures you will execute the task. Because if you miss it more then once, then you basically have to start over again with the loading phase.

After the loading phase your habit is part of your daily routine and you can switch to maintenance phase.

You have built your habit to an extend that it requires almost no will power anymore to execute the task. It is automated and you don’t even have to think about it anymore.

When to switch to maintenance phase?

In general you cannot predict how long it will take to build a habit. It depends on the person itself and also on what exactly you want to train yourself to become a habit.

To find out, whether you have successfully built your habit or not, you have to ask yourself following question: “If I stop the loading phase today, would something change?”

If you answer the question with “No”, then you have built your habit. If you expect yourself to fall back to the old routine within a few days or weeks, then keep on going with the loading phase.

According to Tynan you can allow yourself to be a bit more flexible, when you have successfully built your habbit.

For instance, you can train yourself to eat no junkfood at all. During the loading phase you are, of course, not allowed to go to McDonalds for a burger. Such a loading phase might take up to several years to built the habbit.

Afterwards, in maintenance phase, you can still stick to your plan, but be a bit more flexible. You can allow yourself to break the rule every now and then, as long as it is only exceptionial. Let’s say, that you can agree with yourself that you are allowed to eat at McDonalds, but only on Sundays and with your friends.

Over time though, you are going to drift off from your schedule. So you have to pay attention over the coming month and years and take correcting actions when you realize that you have drifted too much.

As I already mentioned, the awesome thing about habits is that they don’t need any willpower to be executed. You are executing them automatically without putting a lot of thought in it.

It is of course quite some effort to built good habits. But even if the loading phase will take several years, you will have this habit most likely for the rest of your life. So investing a few years is still only a little effort compared to what you gain for the several decades afterwards.

Until now I was only talking about good habits. But you can also have bad habits. You can do things, which are bad for you, but you might not even really notice doing it.

Destroying bad habits is a chapter of it’s own. I am going to talk about it in one of the upcoming posts.

For now, let me know in a comment, for which daily tasks do you want to built habits? Is there anything, which would require a short amount of time per day, but you still are not able to consistently do it?

Ok, that’s it. I wish you a great day. Stay tuned and HabbediEhre! 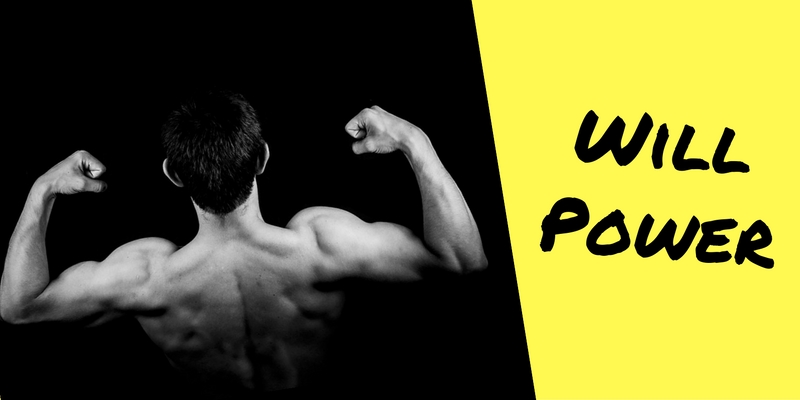 Will power, or you can also call it discipline, is the ability to control yourself. The interesting thing about will power is that it behaves like a muscle: it needs time to recover after you strained it, but you can train it to get more strength.

On the one hand side you need will power to overcome inner temptation and force yourself not to do things. Such things, which are bad for you, but you are so used to.

And on the other side, you need will power to force yourself to do things, which you know would be good for you.

For instance, you need will power to overcome the temptation to not eat sweets when you are on a diet. And you also need it to push yourself out of the couch and to the gym to get in shape.

It seems that people, who achieve a lot in life have a very high will power, otherwise they would not be able to achieve those things. For instance, athletes train every day, while for “normal” people it is hard to even go to the gym once or twice a week.

Will power is limited

Science found out in multiple experiments, that will power of humans is limited. Similar to muscle power, you have only a limited amount of will power per day.

For example you can lift weights only a certain amount of times until your muscles get tired. Then your muscles need some rest to recover, before you can use them again.

Similarly, you can stretch your will power only to a certain degree, after that you need some time to recover to gain back your strength.

I was recently reading the book “The power of habit” by Charles Duhigg. I highly recommend the book, if you want to know more about habits from a scientific point of view.

Anyway, in the book he mentions an experiment, which has been conducted in the 90s.

Each of the participants was put in a room with a plate of food. Half of the plate was filled with warm, fresh cookies and the other half was filled with radish, the bitter vegetable.

After a few minutes the scientist came back to the room, removed the plate and told the participant that they need to wait for few minutes. The participant got a puzzle, which they should solve while they were waiting.

The scientist told the participant, that they could ring the bell, if the need something. Then the scientist left the room.

Actually, the puzzle was the most important part of the experiment. It was not solvable. When you try to solve it you will always fail and it requires a lot of discipline to try it again and again and again.

The cookie eater were very relaxed. They tried to solve the puzzle over and over again. They still had a lot of will power left. Some of the cookie eater spend more than half an hour before they rang the bell.

The radish eater on the other hand, were very frustrated and they rang the bell much earlier. Some of them were angry and told the scientist, that this is a stupid experiment.

This means the radish eater had already consumed a lot of their will power when they were resisting the cookies.

Will power can be trained

There are a number of conducted experiments showing that will power can be trained. If you want to know more, than read the book, which I already mentioned above: “The power of habit” by Charles Duhigg.

You can train your will power, like you can do with your muscles. Training every day makes your muscles stronger and you are able to lift more weights.

It is the same with will power, training it increases the strength and the maximum of your daily will power increases.

Don’t rely on will power

I thought that successful people have a lot of will power, or discipline. Otherwise how would they be able to achieve all those things?

To my surprise it is not will power, that drives successful people. Will power is important, but the key here is to build habits.

Building a habit requires discipline, but when you have built one, then executing it requires almost no discipline at all.

For example, when you were a kid, then your parents probably always had to remind you to brush your teeth, before you go to bed. It required a lot of discipline by your parents to push you and build this habit for you.

Nowadays you probably don’t even think about that you have to brush your teeth before you go to bed. It just happens automatically and doesn’t require a lot of discipline. The habit has been build, executing it is easy.

Anyway, the whole topic about habits is a very big and interesting one. Therefore I will dedicate one of the upcoming blog posts to that topic.

The next time you come home from work with the plan to go running, but you don’t have any motivation at all, then remember that will power and discipline can be trained like a muscle 🙂

Stay tuned and have a great week. HabbediEhre!