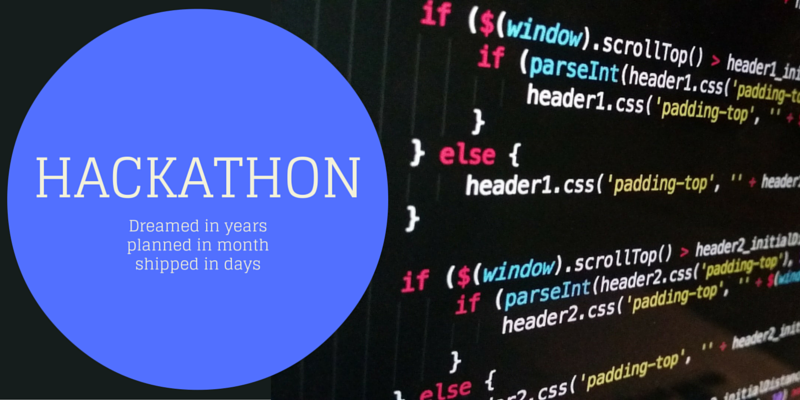 You have great ideas, but there is no time nor money to work on those? Then a Hackathon might be exactly, what can help you to get those ideas kick-started and realized.

About a year ago we at LeaseWeb started to have quaterly Hackathons, where engineers come together to work on new ideas, build prototypes and drive the innovation in the company.

Since then a couple of good ideas have been realized and made it to production.

How does a Hackathon work?

Every 3 month the organizers of the Hackathon send out an invitation to all the people in the company to join the event.

In our wiki we have a page, where everybody can fill in the ideas for the Hackathon. So this is public information from the beginning and everybody can see what coworkers plan to realize.

This helps for collaboration – people start to talk about the ideas and ask each other to join the project.

Joining the Hackathon is optional. If you don’t have a good idea and don’t want to join another project, you can still work on your usual tasks.

The event is organized for two days. The office is open for 36 hours, so you can also work during the whole night. Actually there are always some people, who don’t sleep at all, but just keep working on their projects.

In the morning before the Hackathon starts we have a short kick-off meeting. There you take your final decision on which project you are going to work for the next 36 hours.

In addition, you get a T-Shirt with the theme of the Hackathon. One theme for example was “Dreamed in years, planned in month, shipped in days!”

As everyone, who is joining the Hackathon, is wearing the T-Shirt other people in the company immediately recognize that there is something going on. They are getting curious and start to ask questions, which makes the event even more popular over time.

The organizers also take care that everybody has a good time during the event, therefore they provide everybody with drinks and snacks during the day. In the evening the participants are invited for dinner, usually pizza and beer.

Throughout the day people also need some time to relax. Therefore we have our gaming room, which consists of a Nintendo Wii and a XBox 3.

But the highlight of each Hackathon is the fun-event, which takes place in the evening/night. As an example we had a “war with Laser guns” with about 30 people. You can imagine, that it was really fun to run through the company from midnight until 2:00 a.m. and shoot each other with a laser gun.

After that, some people went home sweaty, and some other took a shower in the company and continued with their project.

The final part of the event are the presentations at the end of the second day. The whole company is invited in the presentation room and all the projects, which achieved a result, are presented.

Afterwards the winning project is elected and the winner gets the trophy, which he/she is allowed to place on his/her desk until the next Hackathon.

There were a lot of nice projects, which have been started during the Hackathon and resulted in an additional feature or product.

Let me give you just two examples of those projects, which have been realized during such events.

The first project, which I did with my team was to visualize the location of customers logging in to our customer portal. Based on the IP address we calculated the location using MaxMind and displayed this information on a map. So you could see a small point flashing on a map, indicating that a customer from that region just logged in to our system. This was a nice little project to visualize where our customer base is coming from.

Another guy, which does not know anything about coding, also joint the Hackathon and his project was to chat non-stop for 36 hours (with a few breaks) with customers to get feedback and insights on products and services. This is a really nice example how non-technical guys can join such an event as well.

By the way, did you know, that also Facebook’s Like button was conceived as part of a Hackathon? Fun, he?

What are the benefits of such events?

Well, first of all this has a lot of benefits for employees, but also the company gains advantages from such events.

Hackathon are highly motivating for employees. You are allowed to work on fun projects, your own ideas, and you even get paid for that.

Next to that a lot of people produce something, which is very useful. Either it is a small new application or it is a tool, which makes you more productive. Or it is even just getting more experience with a new technology you try, which might help you later in another project.

And these events also foster team building. You work together with other people for an intense time and for a whole night. And you have some great events in the middle of the night, which brings the whole team closer. There is a lot of energy during these kind of events.

Benefits for the company

But also the company itself benefits from Hackathons. As I already said, people come up with new tools or with automated processes, which increase productivity.

Or new tools or products can have their origin in a Hackathon. It is really essential for a company to have a good balance between exploitation and exploration. While exploitation means to make money with improving existing products and services, exploration means the invention of new products or services. Hackathons foster the latter.

And another important benefit is the marketing aspect. When people ask me about my work, then I mostly tell them about the Hackathons and the great ideas we realized and how much fun we had.

This is the kind of event sticks to employees and they are proud to tell other people. In the end such stories can foster the hiring process and bring in new talented employees into the company. So it is an easy way of marketing for the company.

Leave me a comment and tell me if you have Hackathons in your company and if so, how do they work there?

Have a great day and stay tuned. HabbediEhre!