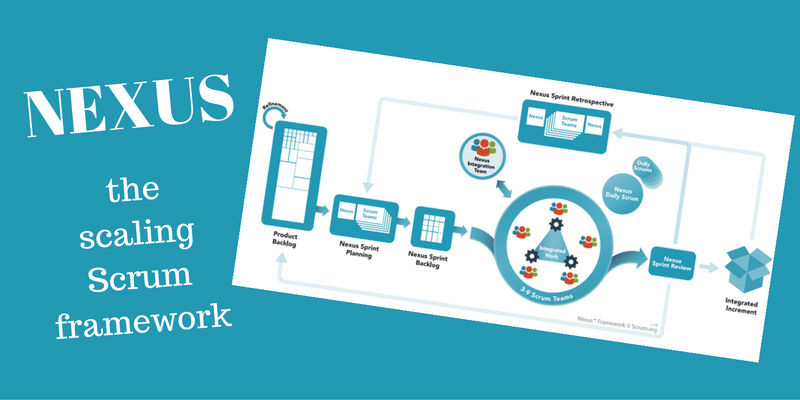 Nexus is a framework, which builds on top of the scrum framework and is designed for scaling. It focuses on solving cross-team dependencies and integration issues.

The Nexus framework has been created by Ken Schwaber, co-creator of the Scrum framework.

Similar to the scrum guide, there is also the Nexus guide, which contains the body of knowledge for the framework.

It has been released by scrum.org in August 2015.

You can find the definition of Nexus in the Nexus guide as follows:

Nexus is a framework consisting of roles, events, artifacts, and techniques that bind and weave together the work of approximately three to nine Scrum Teams working on a single Product Backlog to build an Integrated Increment that meets a goal.

The Nexus framework is a foundation to plan, launch, scale and manage large product and software development initiatives.

It is for organizations to use when multiple Scrum Teams are working on one product as it allows the teams to unify as one larger unit, a Nexus.

Nexus is an exoskeleton that rests on top of multiple Scrum Teams when they are combined to create an Integrated Increment.

Nexus is consistent with Scrum and its parts will be familiar to those who have worked on Scrum projects.

The difference is that more attention is paid to dependencies and interoperation between Scrum Teams.

It delivers one “Done” Integrated Increment at least every Sprint.

The guide defines a new role, the nexus integration team.

It is a Scrum team, which takes ownership of any integration issues.

The Nexus integration team is accountable for an integrated increment that is produced at least every Sprint.

In Nexus the refinement meeting is formalized as a separate scrum event.

In the cross-team refinement event Product Backlog items are decomposed into enough detail in order to understand which teams might deliver them.

After that dependencies are identified and visualized across teams and Sprints.

The Scrum teams use this information to order their work to minimize cross-team dependencies.

The purpose of nexus Sprint Planning is to coordinate the activities of all Scrum Teams in a Nexus for a single Sprint.

Appropriate representatives from each Scrum team participate and make adjustments to the ordering of the work as created during Refinement events.

Then a Nexus Sprint Goal is defined, an objective that all Scrum Teams in the Nexus work on to achieve during the Sprint.

The Nexus Daily Scrum is an event for appropriate representatives from individal Scrum Teams to inspect the current state of the Integrated increment.

During the Nexus Daily Scrum the Nexus Sprint Backlog should be used to visualize and manage current dependencies.

The work identified during that event is then taken back to individual Teams for planning inside their Daily Scrum events.

This is a very highlevel overview about Nexus, you can find more information in the Nexus guide or in this nice introduction.

I am practicing Scrum for quite a while now, but I have never heard about Nexus before. Only last week I stumpled upon it on the Internet.

Therefore I also don’t know anybody who is actively using the Nexus framework in their daily work.

But from this point of view it looks like Ken Schwaber did a very good job again when defining this framework.

I hope that I will have the chance some time to work with Nexus in real life. Of course, for that you need to have the environment where it would make sense to give the Nexus framework a try.

Ok, that’s it for this week. Have a good day and HabbediEhre!