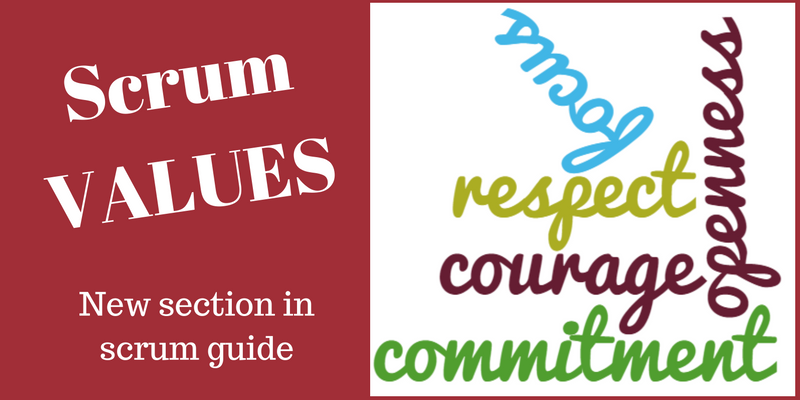 The scrum guide, the official description of the scrum working methodology, has been recently extended with a new section: the scrum values.

Before we dive deeper in what the scrum values are about and what they mean, I want to give you a quick overview on the history of scrum, and especially about the history of the scrum guide.

Then it should be easier to understand the big picture, when and why the scrum guide has been created and updated over the years.

Scrum is now about 21 years old.

Jeff Sutherland and Ken Schwaber, the fathers of scrum, presented their paper “SCRUM Software Development Process” the first time in 1995 at the Oopsla conference in Austin, Texas.

But the name scrum was not their invention. They inherited the name from the paper The New New Product Development Game published by Takeuchi and Nonaka a few years earlier.

Scrum is used to solve complex problems. It uses an empirical approach and solves problems based on experience and facts.

Until today scrum has been adopted by a vast amount of software development companies around the world. But scrum has also been successfully applied in other domains, for instance manufacturing, marketing, operations and education.

Jeff and Ken published the first version of the scrum guide in 2010, which is 15! years after their first presentation of scrum at the conference. I don’t know why it took them so long nor what has been used by the community before that.

Jeff and Ken made some incremental updates to the scrum guide in 2011 and 2013. Together they established the globally recognized body of knowledge of scrum, as we know it today.

Recently, in July 2016, a new section has been added to the scrum guide: the scrum values.

Let’s have a look at each of those values including the one sentence of description from the scrum guide.

People personally commit to achieving the goals of the Scrum Team.

I am personally very happy that this value has been added to the scrum guide and is now officially recognized as an important value for a scrum team.

It is a challenge to get the team to commit to the goal of a sprint, but it is a cruicial part in making the team successful.

The Scrum Team members have courage to do the right thing and work on tough problems.

People should stand up for their beliefs and for what they think is important to put the team to the next level.

People in a scrum team should not be afraid of though problems. They face even the thoughest problems and try to solve them together.

Everyone focuses on the work of the Sprint and the goals of the Scrum Team.

People are not picking up work outside of the committed sprint. They focus on the work, which has been agreed upon in the sprint planning.

The Scrum Team and its stakeholders agree to be open about all the work and the challenges with performing the work.

There is no hiding of facts or not telling the whole truth about what is going on. There are no political games played.

Everybody is honest about the problems they face and for instance explains why things are delayed to give the stakeholder insights of what is happening within the team.

Openness in the team as well as openness to the stakeholders builds trust and a better working environment.

Scrum Team members respect each other to be capable, independent people.

Respect is one of the key elements of building a good culture within the team and in the whole organization.

Treat people as you want to be treated!

Why has the scrum guide been extended?

How were those changes in the scrum guide implemented?

Ken and Jeff built a community around the scrum guide and they are running an online platform, called users voice, where people can make suggestions for changes in the scrum guide.

Other people can vote for those suggestions, but the final decision for making changes in the scrum guide is still taken by Ken and Jeff.

Today scrum is recognized as the most applied framework for agile software development.

The scrum guide plays a very big role in the success of scrum, because it is the first reference point for people wanting to learn more about it.

The newly added section containing the scrum values are a very welcome idea to improve the scrum framework even further.

I will definitely present those scrum values to my team to make them think about this topic and get a discussion rolling. Let me know, if you did the same and share your experience in a comment.

That’s it for this week. Stay tuned and HabbediEhre!